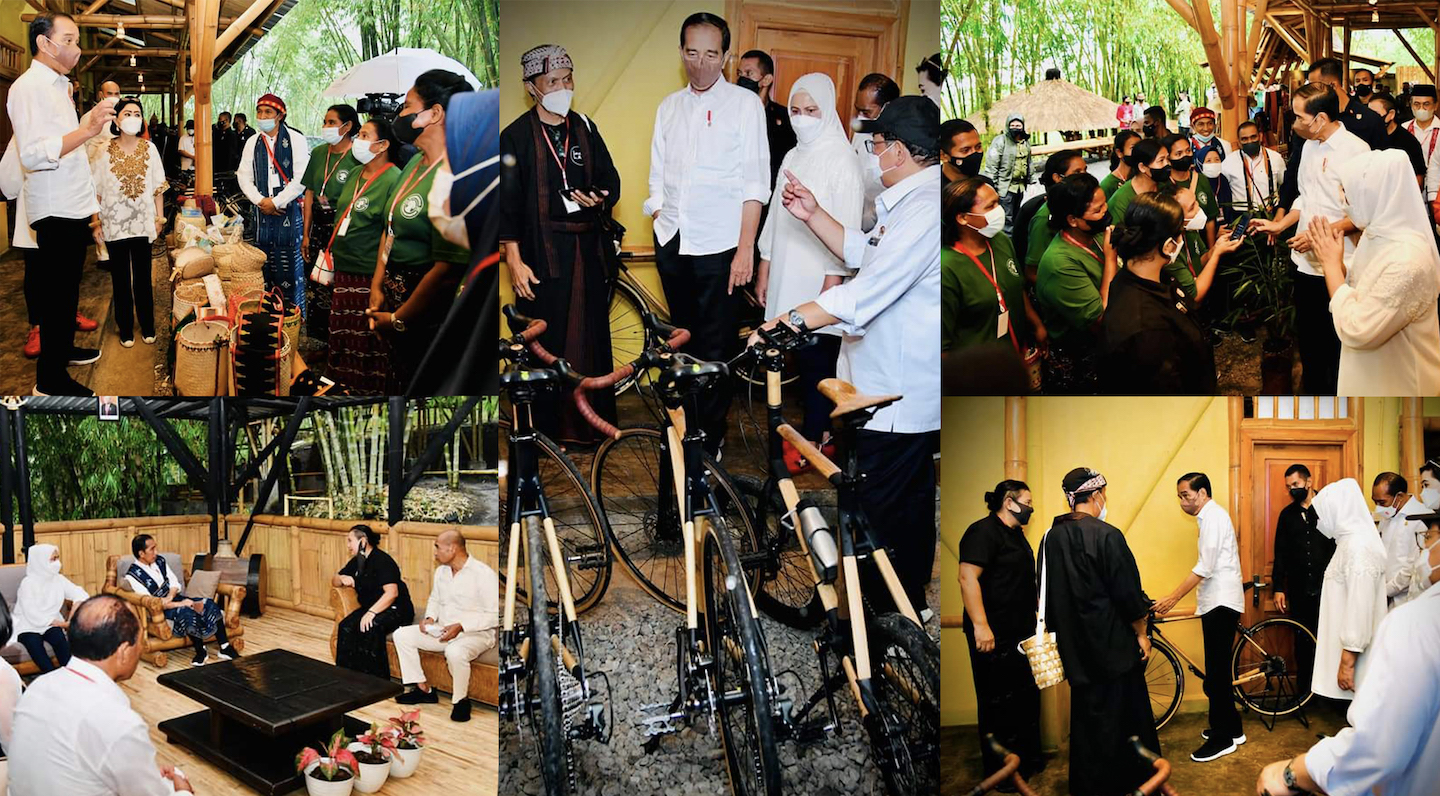 In the midst of heavy rains that hit Ngada, the President of the Republic of Indonesia, Ir. H. Joko Widodo and First Lady Iriana Joko Widodo took the time to visit the Turetogo Bamboo Campus on Wednesday afternoon (1/6) and greet the Mama Bambu, women pioneers who have spearheaded the bamboo nursery and reforestation program in East Nusa Tenggara (NTT).

The nursery and reforestation program using bamboo is a collaboration between the NTT Provincial Government and the Environmental Bamboo Foundation (EBF). The program involved 388 Bamboo Mamas in 21 villages in 7 districts in Flores. In 2021, the Bamboo Mamas succeeded in propagating and caring for more than 2.5 million seedlings. The number of seedlings is sufficient to rehabilitate 72,000 hectares of critical land.

This program is part of a long-term effort to develop bamboo agroforestry villages in NTT. The Bamboo Agroforestry Village program uses bamboo as a conservation plant (restoring critical land, protecting water sources, preventing landslides, absorbing carbon) as well as a plant to improve the welfare of rural communities through the smallholder bamboo industry. 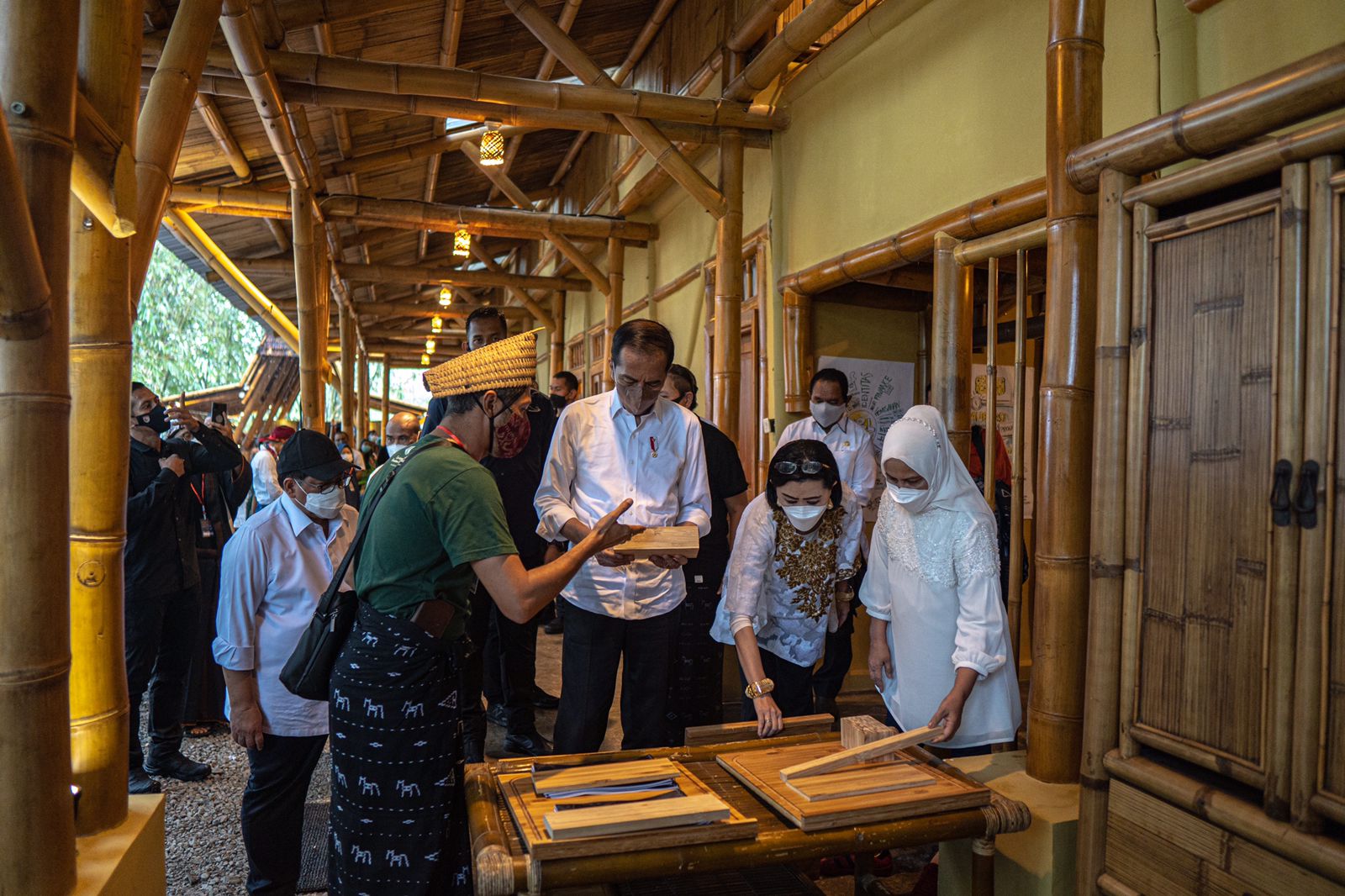 President Jokowi then listened to Arief Rabik’s explanation about laminated bamboo, a processed bamboo product that has a shape and strength similar to wood. With the potential of bamboo that NTT has, this province has the opportunity to become a center for producing laminated bamboo. The global market demand for laminated bamboo will continue to increase because laminated bamboo is a more sustainable, environmentally friendly and lower carbon alternative than wood.

President Jokowi then spent a long time talking with the nine Bamboo Mamas who were the representatives of Bamboo Mamas throughout Flores. Of these nine women, five are from Ngada and four are from Nagekeo. 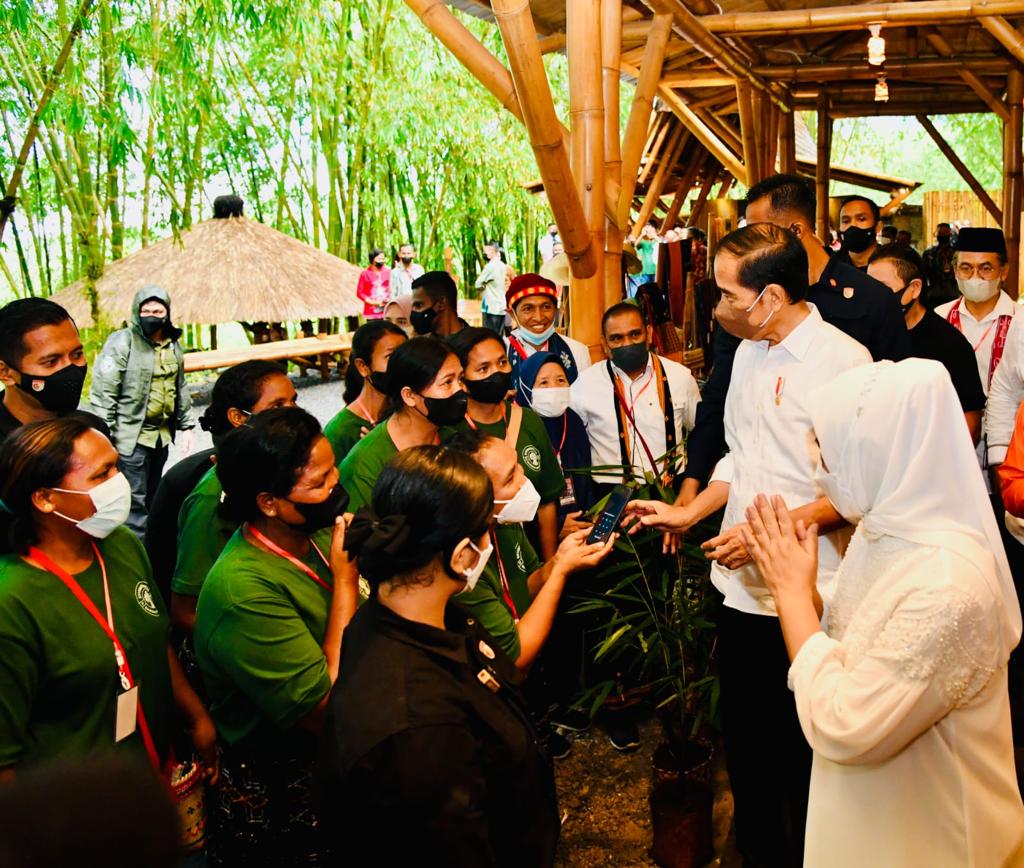 “Mr. President asked about the number of seedlings we produce, the price of seedlings, how to propagate the seedlings, and how long it takes to maintain the seedlings until the each plant has 25 leaves,” said Wilhelmina Bhoki (51), a Bamboo Mama from Genamere Village, Bajawa.

Wilhemina Bhoki couldn’t hide her joy at meeting and conversing with Jokowi.

“I’m very happy, since I was born, this is the first time I’ve been able to meet Mr. President,” she said.

So happy, Wilhelmina and the other Bamboo Mama asked for an opportunity to take a photo with President Jokowi and the First Lady.

“We asked for a group photo, and I was next to the President, very proud,” she said with a smile.

“Mr. President stated that he is ready to help and support these efforts,” said Noer Fauzi Rachman.

President Jokowi and his entourage left the Turetogo Bamboo Campus at 16.00 WITA. 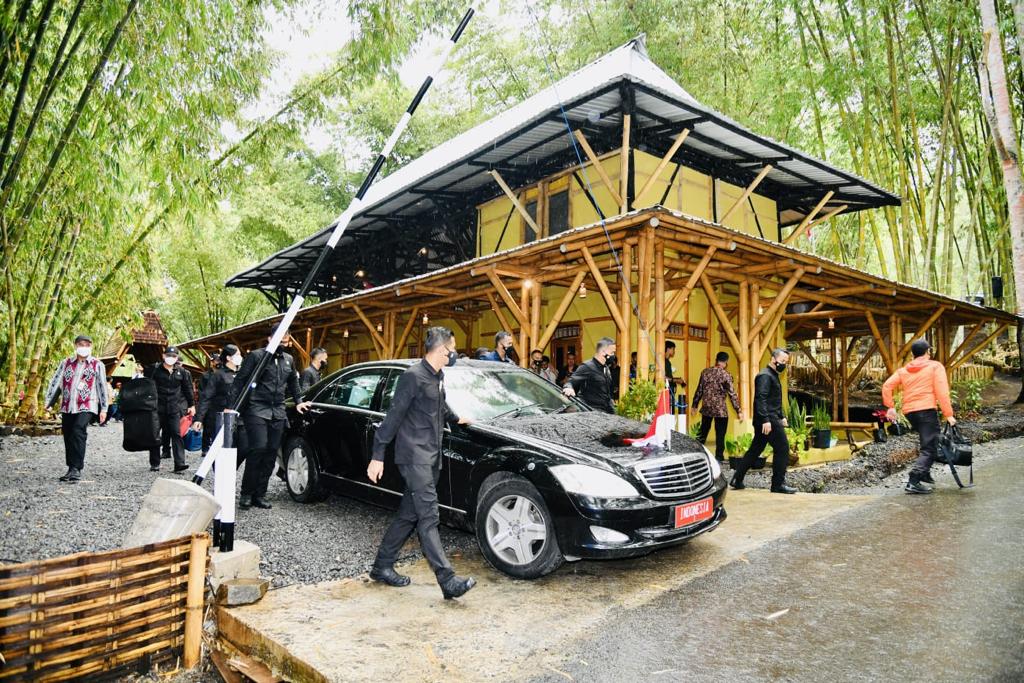 The Turetogo Bamboo Campus was inaugurated in May 2021 and aspires to be a center for education, research, innovation, and cultural exchange about bamboo. So far, the Turetogo Bamboo Campus has carried out a number of educational activities and workshops on the nursery, planting and sustainable management of bamboo forests. The campus is equipped with a number of facilities, including a study building, lodging, bamboo preservation installations, bamboo gardens with local plants, as well as an example of the Sustainable Bamboo House building–a residence made of laminated bamboo with a knock-down system. Rumah Bambu Lestari can be an alternative for social housing, post-disaster temporary housing, public facility buildings, and tourist resorts.

EBF was founded in 1993 and has consistently campaigned for bamboo as an ecological solution and an economic solution in village development. Currently EBF is working with villagers in NTT, Bali, East Java, West Kalimantan and Central Kalimantan in developing bamboo agroforestry villages. 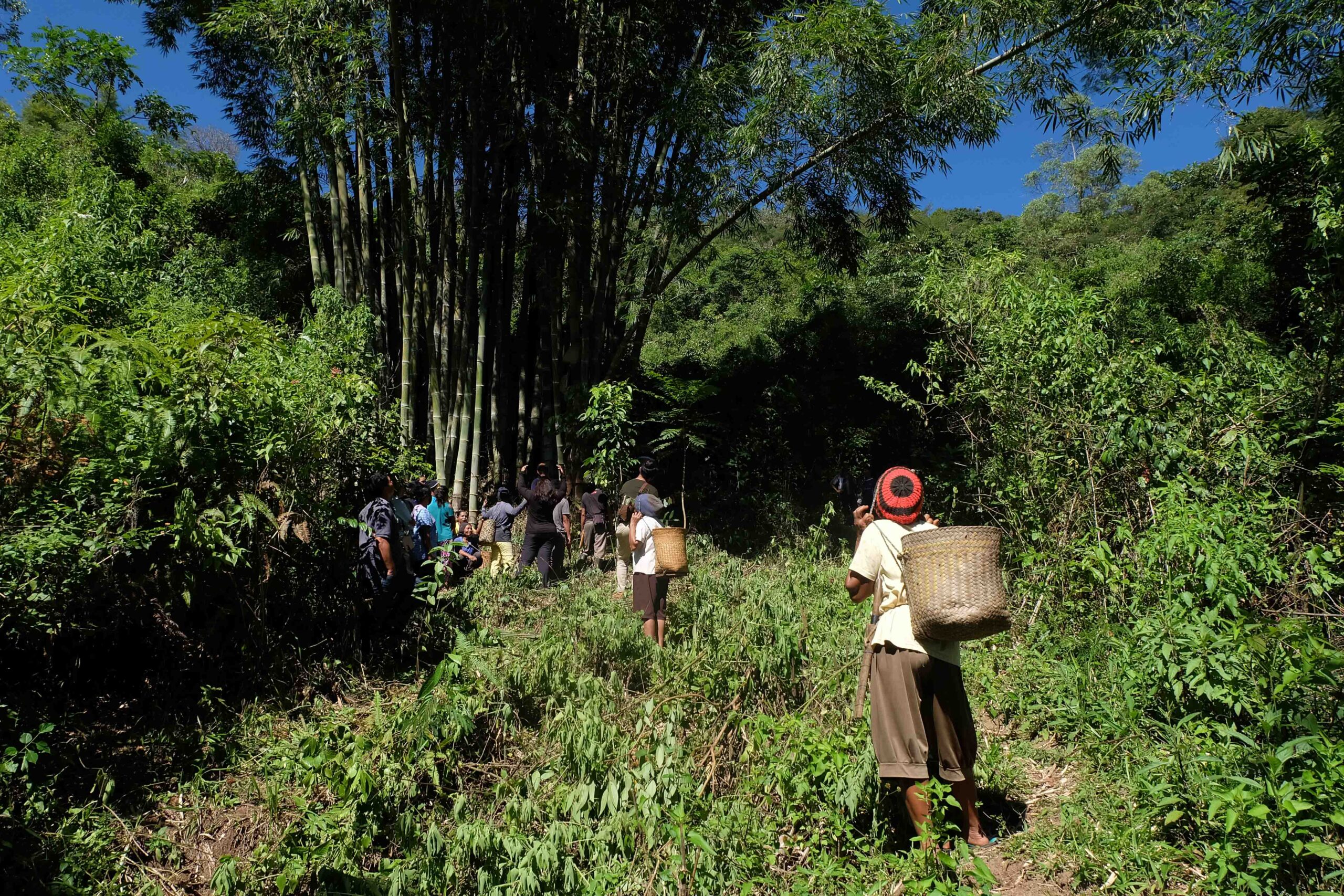 At the end of 2020 the Environmental Bamboo Foundation implemented a bamboo nursery program that places women at the center. We started with something very simple: we wanted to share our experiences about how to grow bamboo. At that time, women who wanted to learn about bamboo or grow bamboo seedlings became our first partners. What started as simple turned out to be a leap of thought and hope among the women, later known as Mama Bambu (Bamboo Mamas).

The Meaning of Land and Bamboo for Ngada Women (an introduction)

Ngada culture adheres to a matrilineal system. In a matrilineal society, the successors of the mother’s line are seen as very important. As a result, family relationships are much closer and more pervasive among residents who are descended from the maternal line.

Traditionally, Ngada women are entrusted with the right to control Ngia Ngora (customary land) and Napu Bheto (bamboo forest). So caring for the bamboo clumps also means caring for ancestral heritage, preserving customs, and conserving ecology for all generations.

When the Ngada woman defends her bamboo forest, she is not only doing it for herself. For Ngada women, taking care of bamboo means protecting her community and future generations from destruction.

The Mama Bambu program not only provides space for women to be physically present in every decision-making regarding bamboo conservation and utilization in Ngada, but more than that Mama Bambu presents the views and values ​​of sustainable use of bamboo. 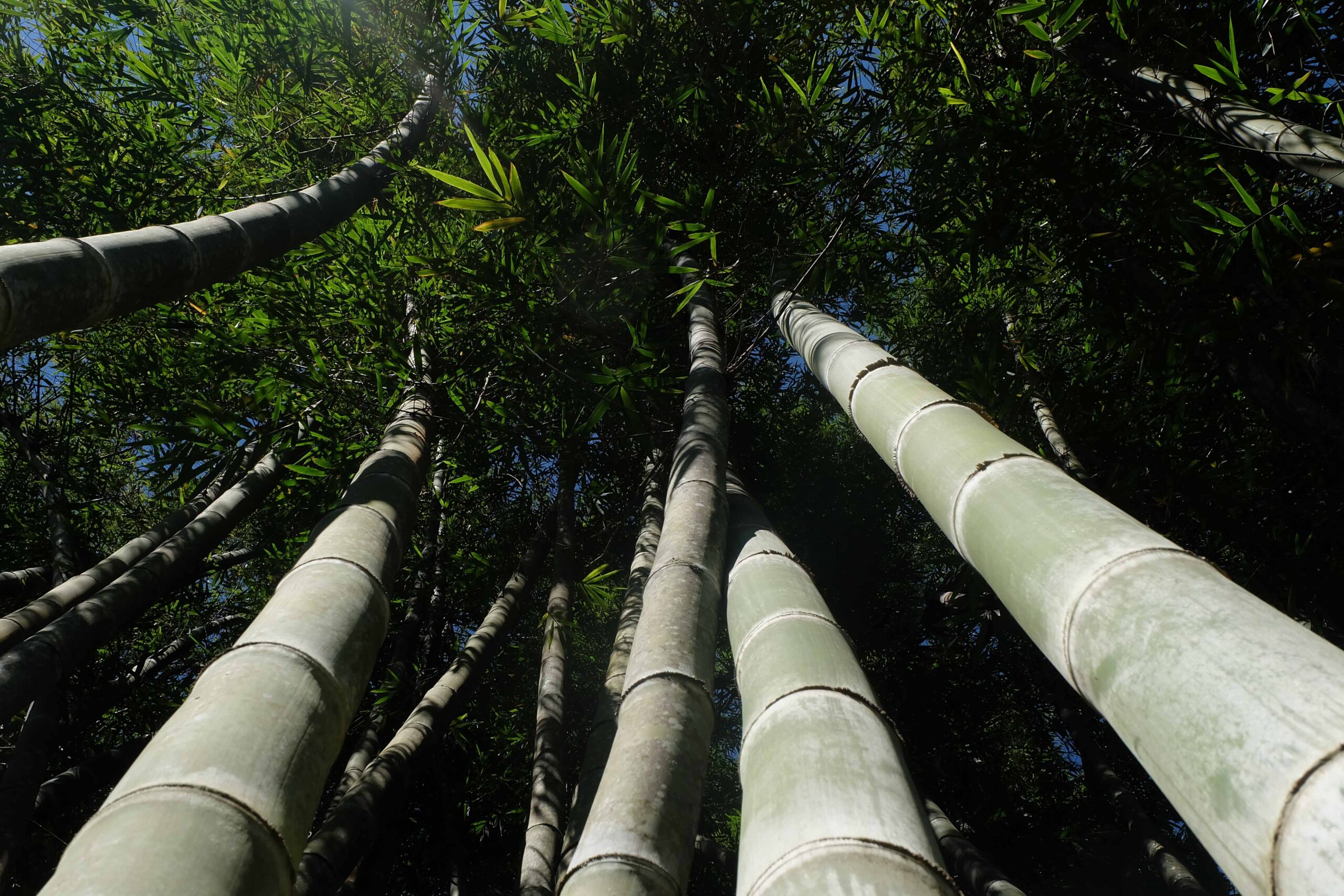 With slightly trembling hands, Maria Danus held a piece of paper containing a welcoming speech that she had prepared together with some of the caretakers of a bamboo farmer group for the commemoration of international women’s day. Being the chairman of the committee was Maria Danus’ first experience and delivering a speech in front of village guests was something that had never crossed her mind. “I was very nervous when I read the speech. But I am proud to be able to carry out my duties for International Women’s Day with the other women,” said Maria Danus.

The first International Women’s Day commemoration was held in Bangka Wela Village following the success of the Balang Leca Bamboo Farmer Group in producing 8,000 bamboo seedlings in no more than 3 months. In this activity, the Belang Leca bamboo farmer group invited the village community, representatives of BKSDH (Forest Resource Conservation Center) and FMU (Forest Management Unit), as well as farmer groups from neighboring villages to plant bamboo seeds around a spring in Bangka Wela village.

“We are very happy to commemorate Women’s Day and proud of ourselves for doing many things and getting a lot of knowledge,” said Liana Wati Hayati, secretary of the Balang Leca Bamboo Farmer Group. The whole series of events to commemorate international women’s day was organized by the Belang Leca Group. “We divide the tasks, there are those who take care of food, cleanliness, lead the prayers, sing the PKK (women’s organization) song, and prepare bamboo seeds to be planted,” added Liana.

The Belang Leca Bamboo Farmer Group is a partner of the Environmental Bamboo Foundation in a family-based bamboo nursery program in Bangka Wela Village, Ngada Regency, East Nusa Tenggara. Because the nursery activities are family-based, in carrying out various activities, family members work together and share roles.

“Finding bamboo seeds is difficult and takes a long time. That’s why we share roles. The fathers went to the bamboo forest to collect bamboo branches, the children filled the soil into polybags, and the women chose seedlings, planted them in polybags, and kept them in the nursery,” explained Antonia Mbue, head of the Balang Leca group.

By sharing roles, nursery work becomes lighter and faster to complete. “At first, we thought we could only produce 2,000 bamboo seedlings because the time was short,” said Antonia. “However, after successfully producing 2,000 seedlings within a month, we became more confident and then committed to producing 6,000 seedlings in the following month,” continued Antonia.

In less than three months, the Belang Leca bamboo farmer group succeeded in producing 8,000 seedlings. These seeds will later be planted on critical lands in Ngada Regency, East Nusa Tenggara once they are strong enough. 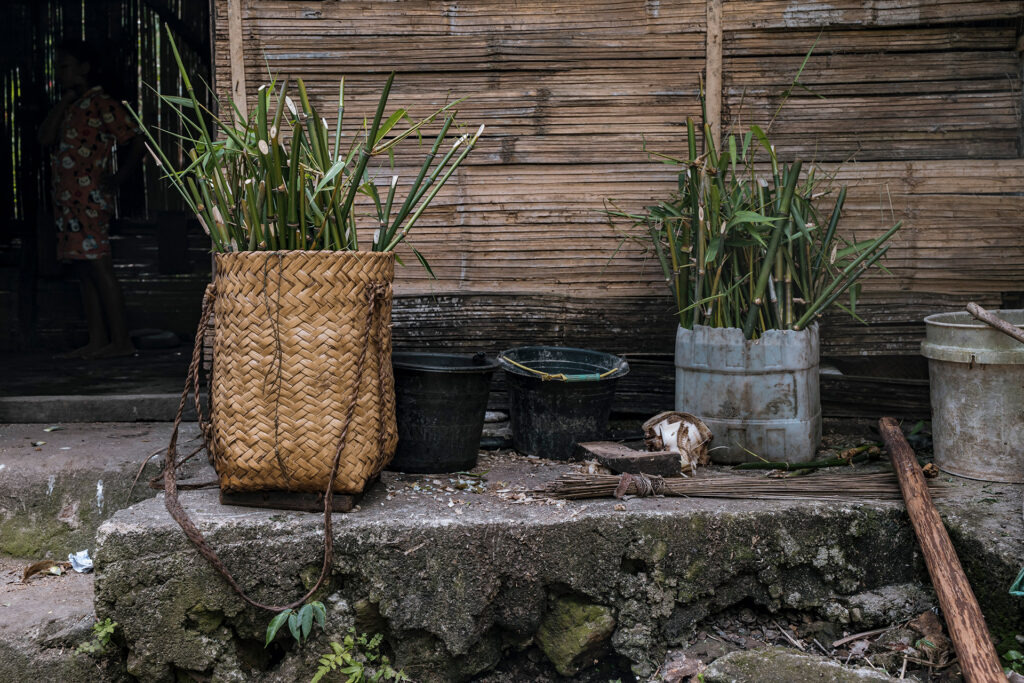 Every month the Bamboo Mamas who are members of the Belang Leca bamboo farmer group hold an arisan (community savings gathering). The purpose of the arisan is to save and share the good practices of each group member.

The arisan event is held in turns, from one Bamboo Mama’s house to another. Every Mama will share good practices on how to care for and produce good seeds. Each group member may ask questions and share experiences. For example, the soil in polybags should not be too dense or the seedlings should not be planted too deep. 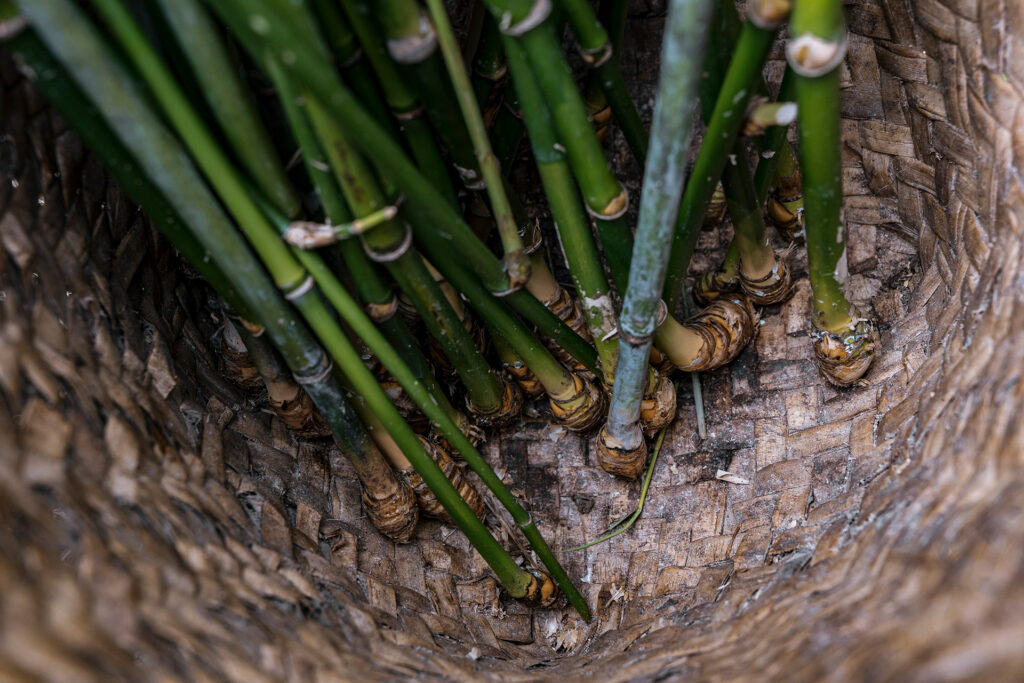 The Mama Bambu program not only focuses on economics and conservation but also builds the confidence of its members. “The Mama Bambu Arisan is an initiative of the Balang Leca Bamboo Farmer Group which indirectly trains their ability to speak in public, think critically and express opinions in group discussions”, explained Septiani Maro, Coordinator of Manggarai Regency.

This family-based nursery program in Bangka Wela also applies an ecological fiscal transfer in which each member of a bamboo farmer group receives an aid of 2,500 rupiah for each successful seedling. Within three months of implementing the family-based nursery program, the Balang Leca bamboo farmer group received a total of 15 million rupiah. The money received is used for various needs of Mama Bambu families, most of which is for the education of their children.

Antonia Mbue admitted that the money she received was used to finance her child who is studying Pharmacy in Malang, East Java. “I am very proud of the results of our hard work in this program because our economic condition is now better. We can send our children to school with bamboo money. If we didn’t have this activity, we might have become workers in Kalimantan,” said Antonia.

When women become the center, and are not only seen as beneficiaries of a program such as this family-based nursery, a Mama Bambu can play a role in deciding the use of money for family members. Moreover, in the community, the success of a family-based bamboo nursery has made Bangka Wela village proud and has ensured the Bamboo Mamas’ roles will be taken into account during decision-making in the village.