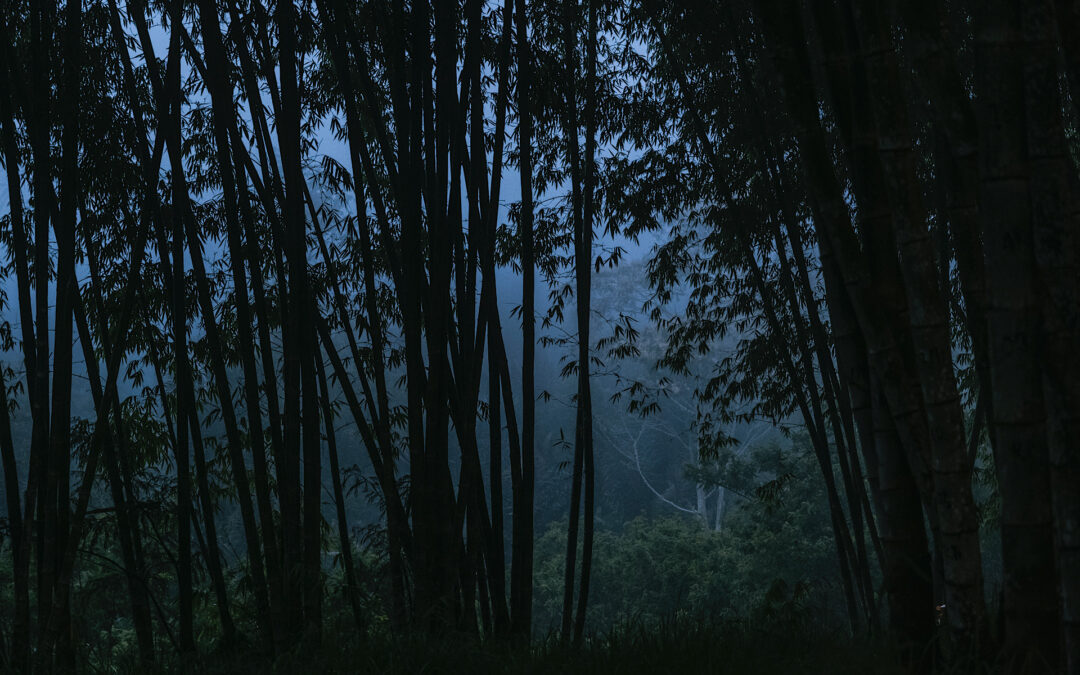 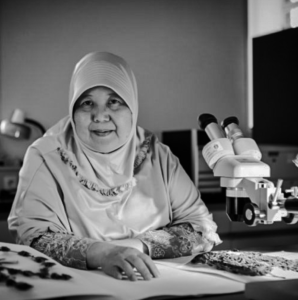 Although it has a huge wealth of bamboo, it turns out that Indonesia does not have many bamboo researchers. Professor Elizabeth Anita Widjaja is a pioneer and perhaps the only bamboo taxonomist in Indonesia. Since 1970, Elizabeth has identified at least 100 variants of 160 species of bamboo in Indonesia.

Elizabeth’s love for bamboo began when she was a student and was involved in research on grasses. Over time, Elizabeth discovered that bamboo is a magical species of grass that has many uses. Yes, you read that right, bamboo is actually a species of grass that can grow to a height of up to 30 meters. Like other grasses, all bamboo has a flexible stem texture and can bend easily.

The woman who gave names to bamboo

Elizabeth’s beginnings in the world of bamboo taxonomy began with research for her thesis. While researching black bamboo as the best bamboo species for making angklung (traditional musical instruments of West Java), she realized that there is only one scientific name for four different species of black bamboo. At that time black bamboo or Gigantochloa verticillata (Wild) Munro is the only name known for four different species: awi hideung, awi ater, awi gambong, and awi mayan.

Until now, at least 160 species of bamboo have been identified and classified by Elizabeth. Of that number, 100 species are the results of her findings. 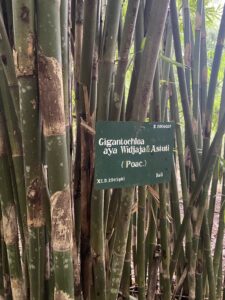 The importance of research for the use of bamboo in Indonesia

The use of bamboo in Indonesia is still not optimal because the government has not paid enough attention to bamboo. Many people think that bamboo is a weed because it is not easy to kill a bamboo clump.

Bamboo has a high survival rate. Even when burned, bamboo can still grow back. Even after experiencing drought during dry season, bamboo will grow again. The extraordinary resilience of bamboo means that it has excellent potential to be planted on dry and degraded lands.

​​”There are many opportunities for bamboo utilization such as for fiber, renewable energy, preventing erosion, for water conservation, and others. Therefore, we need more research on bamboo,” said Elizabeth.

Research is not only needed to find out the various benefits of bamboo, but also to invent better technology for its sustainable utilization and to increase the added value of bamboo.

“Until now, Indonesia has not carried out a detailed inventory of the bamboo population. Bamboo inventory data using drones and remote sensing is still not sufficient to provide information about the potential of bamboo. Especially if the bamboo lives underneath a tropical forest canopy.” The lack of information related to the bamboo stocks means we unable to know for sure how big the potential of bamboo for industry is in Indonesia.

Bamboo cultivation will not become a priority unless entrepreneurs in Indonesia feel the need for it. In fact, many industries in the world are starting to look at bamboo as a key raw material. For example, the textile fiber industry which has become more popular lately in Indonesia. Currently, Indonesian bamboo textile makers still rely on imported bamboo fibers.

“I hope the use of bamboo can be increased but it must be balanced with better knowledge and technology to support sustainable utilization,” said Elizabeth.

The capacity of the bamboo industry must be calculated carefully, including the availability of bamboo raw materials. Bamboo cultivation is very important to ensure its availability for the industry and of course for its ecological and land conservation role. Agricultural technology research is needed to support bamboo cultivation for industry. 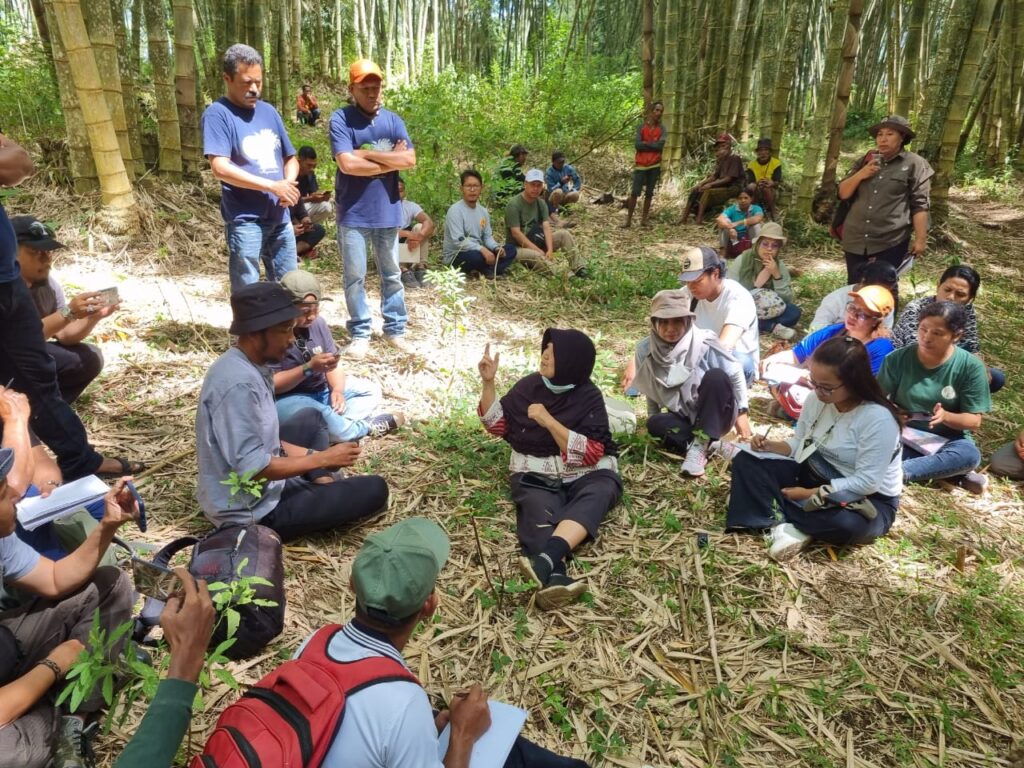 For Elizabeth’s dedication and achievements in the world of bamboo taxonomy, she received various awards, including The Best Young Scientist from LIPI in 1997, Satya Lencana Karya Satya in 1997 and 1998, Bintang Jasa Utama from the President of the Republic of Indonesia in 2000, and the Harshberger Medal by the Society of Ethnobotanists, India in 2001. 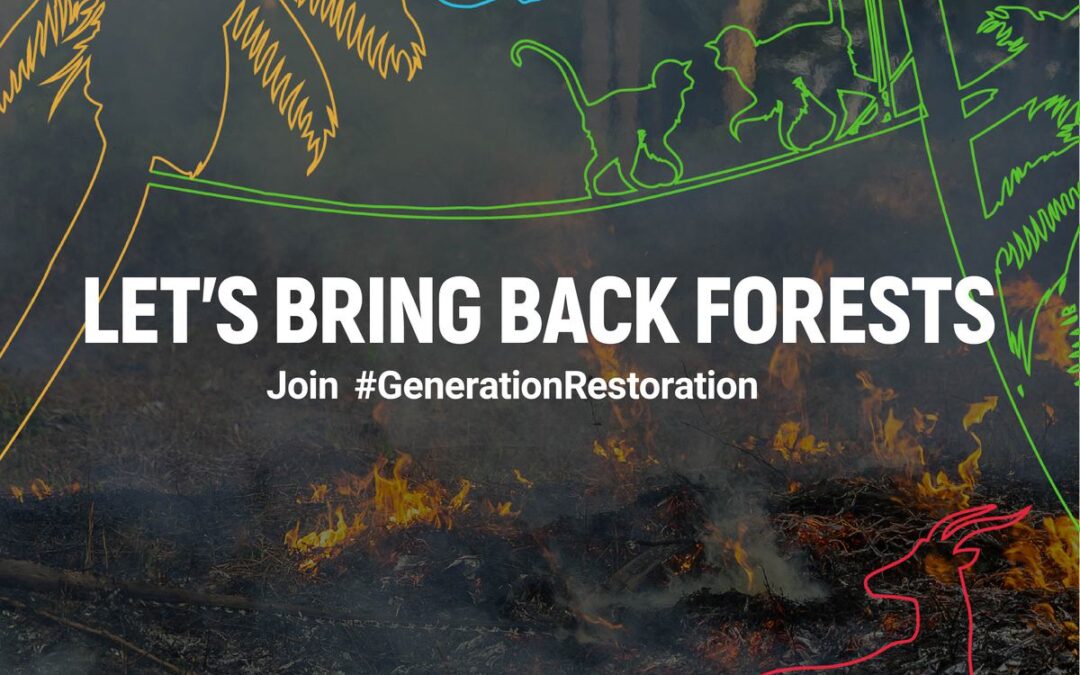 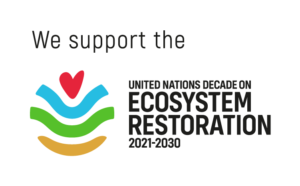 We are very proud to be named as an Actor of the UN Decade on Ecosystem Restoration 2021-2030. Our Board Chairman, Arief Rabik, is part of the Advisory Board for the UN Decade of Restoration and we are happy to be able to support as the whole organization.

Ecosystem restoration means assisting in the recovery of ecosystems that have been degraded or destroyed, as well as conserving the ecosystems that are still intact. Healthier ecosystems, with richer biodiversity, yield greater benefits such as more fertile soils, bigger yields of timber and fish, and larger stores of greenhouse gases.

Restoration can happen in many ways – for example through actively planting or by removing pressures so that nature can recover on its own. It is not always possible – or desirable – to return an ecosystem to its original state. We still need farmland and infrastructure on land that was once forest, for instance, and ecosystems, like societies, need to adapt to a changing climate. 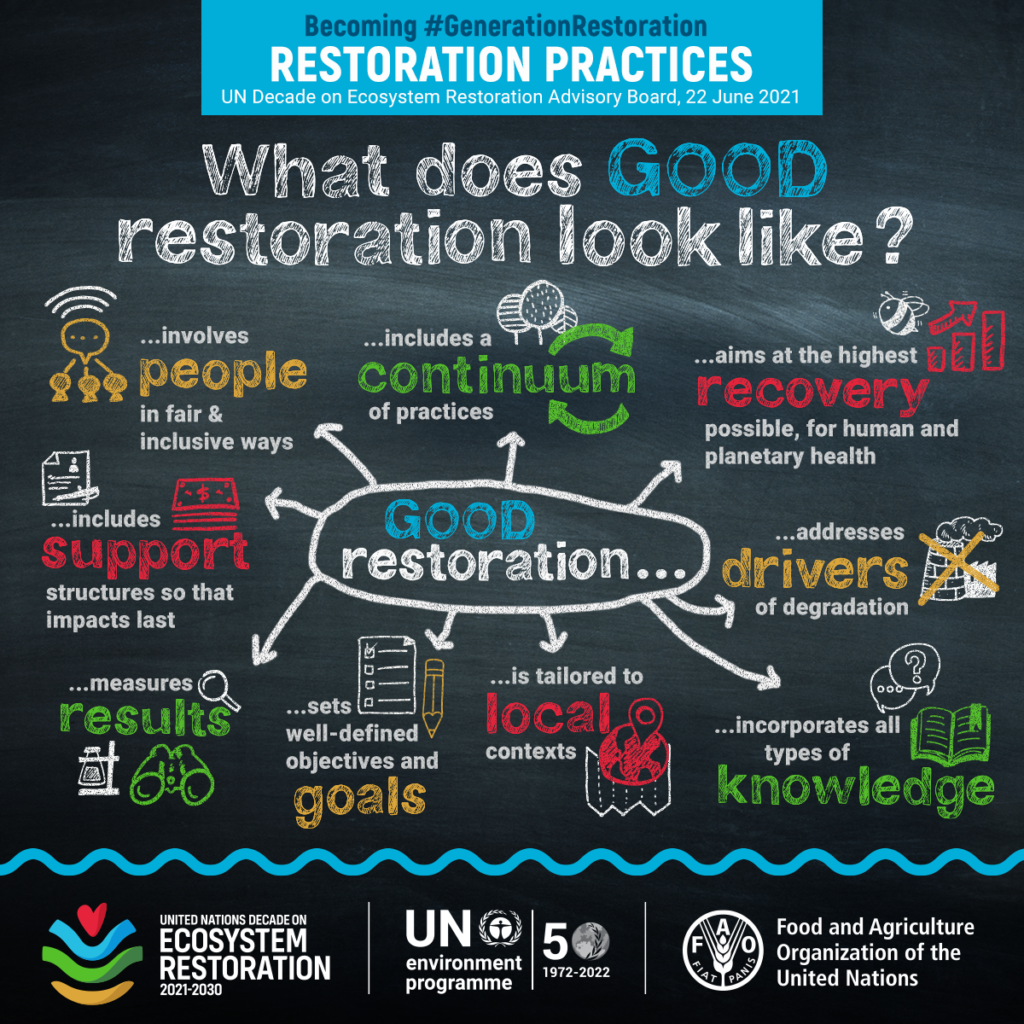 Between now and 2030, the restoration of 350 million hectares of degraded terrestrial and aquatic ecosystems could generate US$9 trillion in ecosystem services. Restoration could also remove 13 to 26 gigatons of greenhouse gases from the atmosphere. The economic benefits of such interventions exceed nine times the cost of investment, whereas inaction is at least three times more costly than ecosystem restoration. 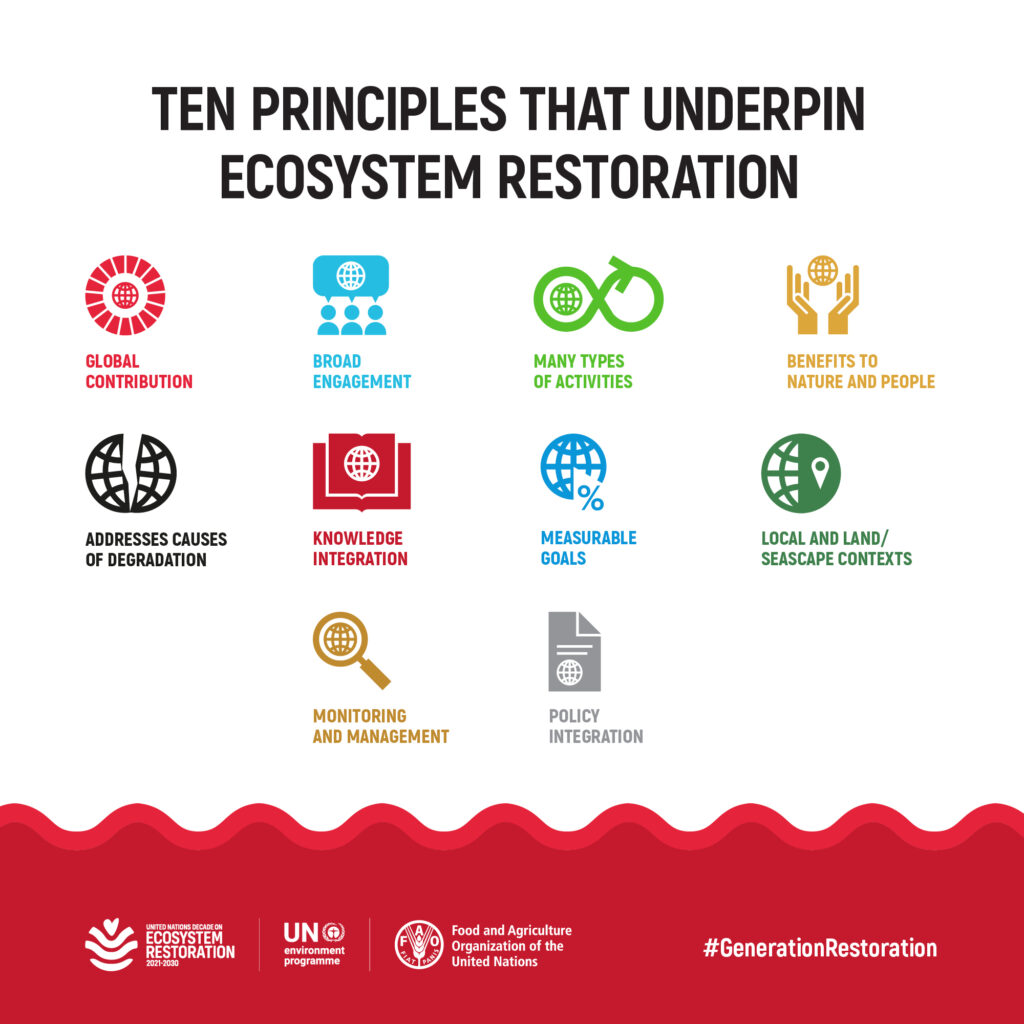 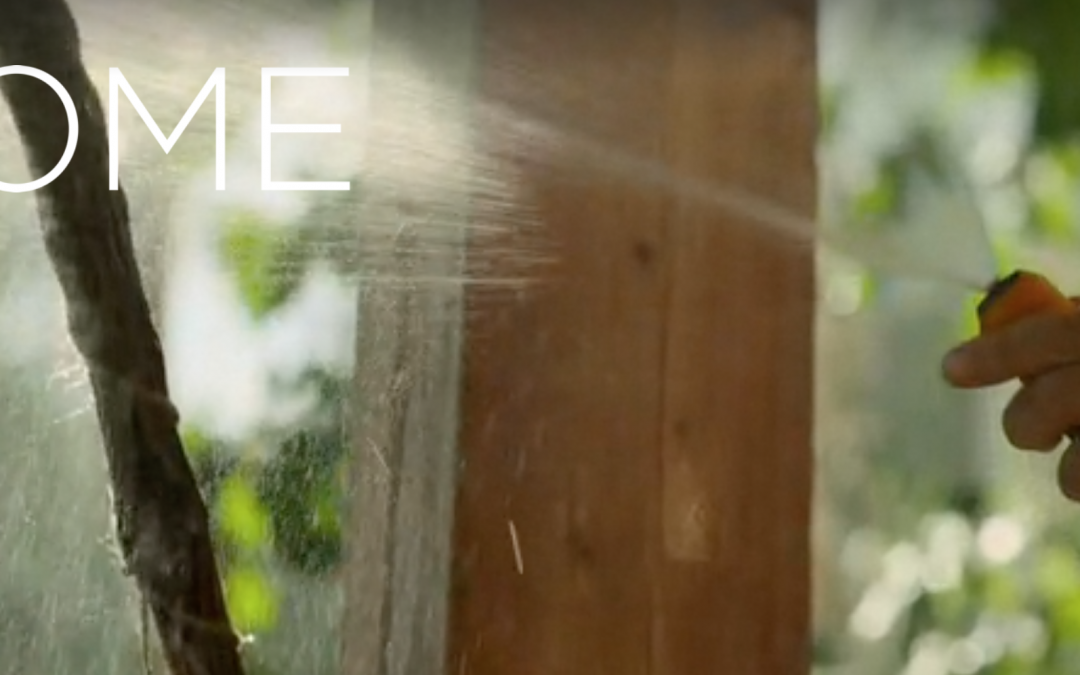